ACRES U.S.A. Conference is right around the corner and this year we are giving away 2 passes to ACRES to one lucky farmer, which will also guarantee a travel voucher for 2 (travel & lodging) to AgriEnergy’s annual winter seminar in January. 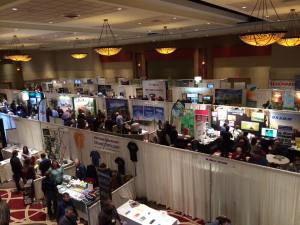 A glimpse into what this year’s trade show could look like…Last year’s birds eye view.

If you’ve ever attended before, you know what a world-class educational and networking event it is. If you’ve never been, trust us, you’ll walk away with so many ideas to maximize profits for the 2016 season. Jam packed with seminars and workshops, you will get the opportunity to “pick the brains” of the most innovative farmers, consultants, soil & crop advisors, authors, nutritionists, holistic veterinarians, researchers, beekeepers, geologists, soil microbiologists, and more.

The conference will be held December 9-11 in Pittsburgh, Pennsylvania and our seminar will be held the last week of January in Illinois. To qualify for your chance to win the jackpot, tell us the first thing you’d do when you get to ACRES (if you win) on Facebook and/or Twitter using the hashtag #AERatACRES and fill out this short questionnaire.

Is grass fed beef no longer a niche market?

Until a few years ago, grass fed beef wasn’t well marketed. Today, the consumer is demanding grass fed beef. If you’re a beef producer, we want to see you meet the needs of your growing customer base by helping you improve your pasture land.

What kind of grass fed beef story would be complete without a picture of cattle in the pasture?!

With that said we will be at the 2015 Grassfed Exchange Conference tomorrow and Friday at the Comfort Inn and Suites in Mt. Pleasant, Michigan. The Grassfed Exchange desires to help producers understand the possibilities for finishing cattle correctly on grass to produce the best quality grass fed beef possible. We hope to join them in helping producers grow in knowledge of the grass-fed industry and in finishing cattle specifically.

The conference will be jam packed with pasture walk tours and presentations by some of our customers including Wayne Rasmussen and Luke Linnenbringer. We will also have a booth at the trade show starting at 10:00 a.m. Thursday through Friday at 4:00 p.m. Be sure to swing by and say hi to one of our agronomists, Gary Campbell. He personally told me right before he left that he is so excited to see what this year’s conference will bring so be sure to make it up to see him!

The Bureau County Fair is set to open Wednesday! There’s always a sense of excitement during fair season, watching the fairgrounds come to life. It’s the one time of year to catch up with old friends, eat junk food (and not feel bad about it), and take in some local entertainment. 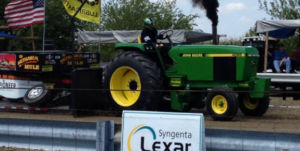 The Bureau County Tractor Pulls will begin at 5:30 p.m. Saturday. Each year, the grandstands are packed.

This is why we, at AgriEnergy Resources, fully support the Bureau County Fair in Princeton and urge you to enjoy local agriculture, food, traditions, and progress our great county has to offer.

Here’s what we’re looking forward to most:

“The FOOD! And watching my grandson on the rides.” – Linda Dickinson, Human Resources

“Neat exhibits! I personally like county fairs better than state fairs because they’re smaller and closer to home. Heck you might even know who is exhibiting.” – John Mayernak, Sales Agronomist

“What I like best about the…
Flowers and floral arrangements
Animals, especially the Angus heifers
Inevitable over-indulgance
Ribs from Kramer’s” – Mardel Robinson, Special Events

THEN, it’s show time. You walk into the ring, sweat dripping down your back, heart a pounding. The judge walks slowly around the ring evaluating each and every steer. You catch his eye. He sees you. He keeps watching you and your animal. The ring is silent. You can hear a pin drop. Then in one swift movement he slaps your steer. Your eyes well up as you catch your families eyes in the stands. Your mom is snapping pictures like a crazy lady. Your dad’s fist goes in the air with a victory punch. Your brother is stunned. Your sister is in shock. You just won the Illinois Sate Fair junior steer show. You can’t believe it. You set out with a goal the previous year and you achieved it. The long hours spent in the barn have finally paid off. You won the whole show.

Posing for a picture with Scotty (the show steer), country music star Scotty McCreery, and Governor Bruce Rauner, 4-Her Taylor Donelson, of McClean County, was all smiles during the Illinois State Fair ‘Sale of Champions.’ Scotty was performing in the grandstands when he heard the grand champion steer was named after him and thought he’d come check it out. Such a cool moment for Illinois 4-H! Photo credit: Scotty McCreery Facebook

While the entire audience can relate in your joy, there are some people, outside of the bleachers, who have no idea what it means to accomplish something as big as winning a livestock show. That is why, at this year’s Illinois State Fair, agriculture was brought back to the front and center, highlighting our state’s deep agricultural roots.

And that is why, we at AgriEnergy Resources, are proud supporters of the Illinois State Fair.

This year, people roaming the Midway had the opportunity to see for themselves how great agriculture is, including Governor Bruce Rauner and country music star and American Idol winner Scotty McCreery. They got in a bidding war during the auction of the grand champion steer. The governor ended up winning the bid with a record-breaking $61,000. Proceeds will go back to Illinois 4-H and FFA while the meat will be donated to the University of Illinois.

All in all, it was a great year for the Illinois State Fair and all the exhibitors. There’s something to be said about the fair, whether you’re into livestock or not. Among the array of foods, concerts, tractor pulls, demolition derbies, horse races, rides, games, there’s something for everyone.

We are so excited to see where the future of Illinois agriculture is heading and we can’t wait to visit our local county fair next week.

What’s your favorite part about the fair?

A Tribute to Dads Everywhere

This picture was taken Sunday, February 22, 2015 at the Illinois Beef Expo and was 11 years in the making.

It was taken after my sister won Grand Champion Breeding Heifer, an honor we have all strived for since 2004. An honor that my brother and I hadn’t achieved in our years of showing.

But most of all, it symbolizes the countless hours in the barn when nobody sees. The time spent learning everything there is about the breed and more. The encouragement from our parents.

They never missed a show. Even if it meant driving 14 hours one-way.

So, dad, if you’re reading this thank you for making our dreams come true. Thank you for teaching us “kids” it’s okay to lose, because one day, with a lot of sweat equity, the winner’s circle will feel even more amazing than the hurt of losing ever felt.

And to dad’s everywhere, you truly do have a special role in developing tomorrow’s leaders.

From myself and all of us here at AgriEnergy Resources, Happy Father’s Day weekend!

Because we work with dairies all over the country, we enjoyed following Blosom’s journey towards becoming the world’s tallest cow. Beyond that, this Holstein cow was a friend to many.

While we had this exciting post about Blosom to kick off dairy month, we were all quite saddened when we heard she went on to “graze in a more glorious pasture” on May 26. She was 13 and died of a nasty fall that damaged a ligament in her back leg.

So, instead we thought we’d remember her life with these fun facts about America’s favorite Holstein cow:

Ever since Blosom was 8-weeks-old, Pat knew she was a special animal. Rest in peace Blosom. You will surely be missed!